So I’d like to tell you about turning 30 years old.  It started early in the morning with a call from Charles, the sub-contractor for the road construction crew who is responsible for relocating the water systems affected by the road project.  There was a problem.  That morning when the road team was excavating the new road path, they cut through a pipe that serves the district hospital and this pipeline was 110mm in diameter (this is equivalent to a 4 inch line that is only used in very few places in the district).  He had known that there was a line for the hospital in the vicinity of where the damage occurred, but he didn’t know that it was 110mm and didn’t know the exact location ahead of time (as-built drawings and maps of the older systems are often non-existent or misplaced).  And this was why he was calling – he didn’t have the supplies to make a repair on the 4 inch line and wanted to know if I had anything in the district (as his next option was supplies from Kampala which would have been at least a days delay if not more – time that the hospital didn’t have).

It turned out that I did have 11 meters of 110mm HDPE piping from a previous project that the mission had done and one 110mm PE Union that I had purchased for our system when it was sabotaged during the riots last summer  (that’s the piece that joins two different pipes together).  It was the minimal solution to make a fix, 2 unions would make the job a lot faster and less likely to fail in the future, but with only one we would be at least able to join once side of the repair by heat fusion (basically a really hot metal plate that melts the two ends of the pipe to their melting point and then we hold the ends together until it cools and fuses together).  Charles came over and we loaded up the pipe on his truck. 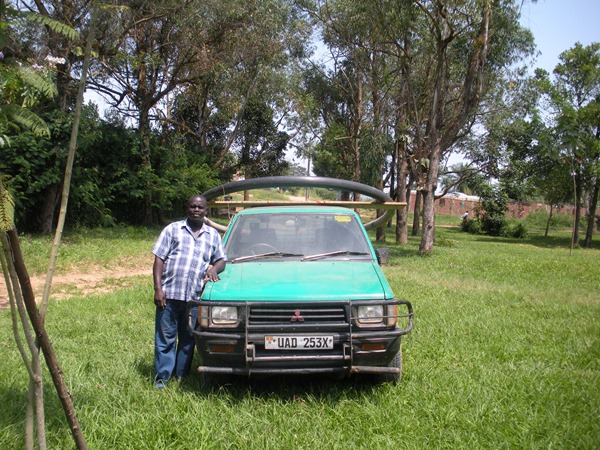 The pipe was a little oversized to fit in the truck bed, but we improvised with a board and slow speeds to Bundibugyo Town, about 12km away.  The following pictures show the scene when I arrived: 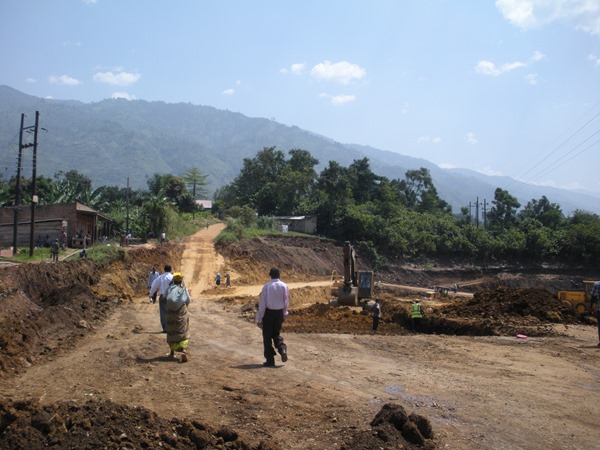 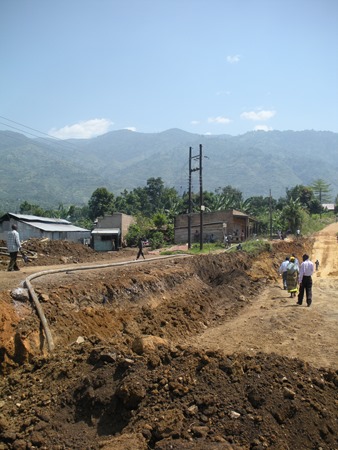 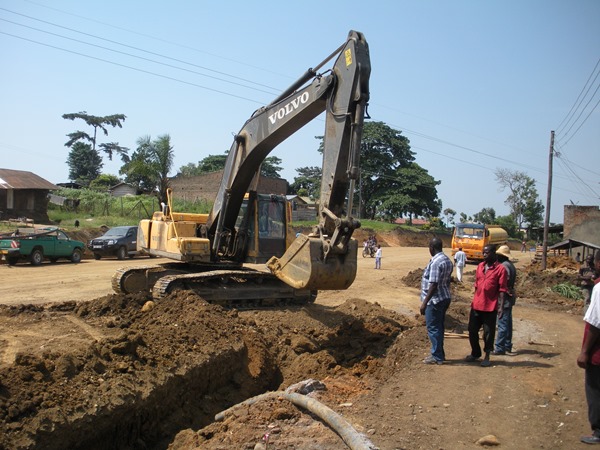 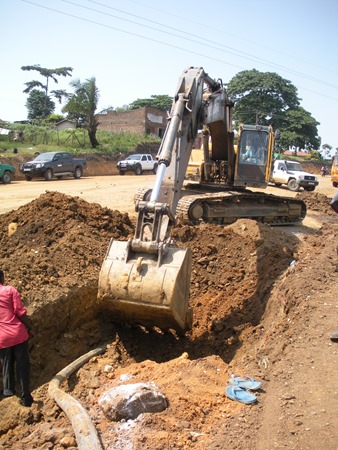 At this point the fix should have been simple excavation of a new trench for the pipe so that it would be out of the way of the road and then the quick repair and backfilling so that the pipe would be protected and the hospital would receive water.  It was about 10 am. Well the road crew wasn’t ready to dedicate an excavator at that precise moment, we had to wait for it to become available.  We waited about an hour and then decided to take an early lunch when the road crew told us that it would be about another hour or so.

Shortly after we retuned the excavator was sent to begin excavating the trench for the pipe.  And this is were things got ugly.  Before continuing with the story, I would like to point out that there are always multiple perspectives to every story and at least two sides to every argument.  And sometimes you find yourself in the middle of an argument that you didn’t know was previously there.  As the excavator moved down the approximately 70 meters of trench that needed digging I saw an auspicious sign at the far end of the trench – a man waving his arms and yelling at everyone nearby.  I asked someone next to me who that was and what was going on.  They told me that it was the homeowner of the land and that he was in a dispute with the road construction company and government over compensation of his land.  My heart sank as I new this was not going to be a good situation.  He was saying that he had not been paid for the land and that he was refusing to allow the road company to work on the trench.  It would so happen that the 5 meter section of land that he was refusing work on was the exact location where the repair was required.

I went to talk to the man.  He was animated and livid.  He yelled that he refused for any work to be done on his land.  I asked him if he knew where the water went for this pipeline – he said that he didn’t care.  I said that it went to the hospital and that if the water wasn’t restored that people would die – he said: “let them die.”  At some point he called me a worthless mjungu.  He went to the road crew and threatened violence if they didn’t stop.  The police showed up as they had caught wind of the situation.  The man yelled about police intimidation. I was caught in the middle of a dizzying situation in what seemed like injustice for this one man up against injustice of the many infirm at the hospital. The on-site road construction in-charge said that they wouldn’t continue working with potential danger from the community.  I wouldn’t accept for the hospital to remain without water.  I phoned the LC-V (he is like the governor of the district). He asked me to come meet him and I took the water sub-contractor with me.  He was currently meeting with the district Deputy Chief Administrative Officer and a representative from the primary road contractor.  We explained the current situation and he said that he would send the Deputy CAO and contractor representative to come and talk with the man.  These men came and spoke with the homeowner and instructed him on the appropriate means to file for the additional land taken.  He calmed and agreed for us to work.

We measured the distance of new pipe needed for the repair: 1.2 meters.  We heated the ‘burning plate’ to 220 C on a charcoal stove and prepared the ends of the pipe to be perfectly matched.  We melted the new piece onto the old pipe to make up the difference due to the damage and the shifting of the pipe.  Then we attached the union to join the pipes together and finish the repair.  Total actual repair time – 1 hr. Emotional time invested to enable the repair – over 6 hrs.

I would like to reflect on this case after the fact and say that I understand the man’s anger and frustration and that it was a result of the fact that compensation procedures on a big project like this take time and often don’t keep up with the pace of work.  I also realize that he was advocating for himself in a place where it can be hard to trust that you’ll receive what is promised.  I do not believe he meant some of the words he said.  I do want to point out that I observed the police and government officials handling the situation very professionally, from the police officers who were calm and responsible to the LC-V who invited me to meet him with no notice and who arranged the diplomatic envoy of the deputy CAO and road contractor representative to meet with this man.  Both of them as well were calm, professional, and negotiated a good solution to the problem.

I raced back to the mission for my 7pm - 30th birthday dinner.  I was sunburnt, emotionally done, physically exhausted, and mentally wearied by the day.  The words exchanged made me realize that I am an imperfect advocate and an imperfect missionary. I found that it was easier to mutter a curse word under my breath than a silent prayer for help in the stressful moments.  That night I wondered if God had been glorified or if I was trying to push things through in my own power and it was hard to find rest.  The only thing that I knew for sure was that there was water back at the hospital.

So I need prayer and all of the imperfect missionaries that you support need prayer.  There are days, like my 30th birthday, where you have to repair the hardest 1.2 meters of pipe you have ever had to repair.