Trying to stay a step ahead of the “one step back”

One of the things that has characterized some of my frustrations working with the water project are the steps backward that we sometimes take.  In my 9 months in Bundibugyo, the water project has been sabotaged 3-4 times (it gets hard to remember).  Sometimes it has been ignorance – a child wondering into the area housing the reservoir tanks and grabbing a 1/2” GI pipe that acts as a snorkel for the system and breaking it off.  (a snorkel is a pipe that allows air into the system when it is turned off to ensure that the HDPE pipes don’t collapse under the vacuum of water and surrounding soil pressure.  By nature, they have to be taller than the static pressure head so that water doesn’t come out of them.  At the reservoir tanks, they are 10’ tall and connected at only one end which means that not much force is required to break them off).  Sometimes it has been thievery – someone cutting some metal pipe for their own personal use.  And sometimes, heartbreakingly, it has been intentional sabotage to prevent other’s access to drinking water, which happened during recent tribal conflict.  Thus,  I have spent time planning, designing, and fabricating countermeasures with the help of my Ugandan friends. 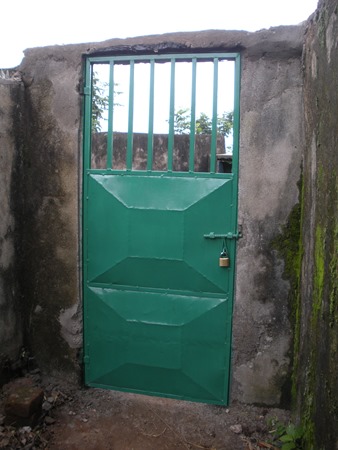 The first step has been installing a new door at the reservoir tank compound.  There had been a wooden door installed there when the tanks had been first completed, but a long time ago it had rotted away  (I’m pretty sure that it wasn’t even there in 06-07 when I did my internship in BGO).  Hopefully this door can last for years (praying maybe decades). 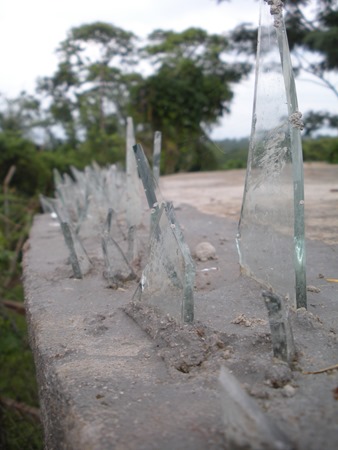 The next step was ‘glassing’ the upper rim of an unprotected section on one of the reservoir tanks.  The height of this tank was low enough to pull yourself up to get access to the top of the tanks (I know, I used to do it regularly).  With the door in place, it would be simple to bypass by jumping to the top of the tanks.  While neither of these measures have transformed the tanks into an impenetrable fortress, I’m hoping that they will greatly reduce vandalism.

The other area that needed attention was the sedimentation basin.  This is a specially designed tank at the source to remove some dirt, sand, and other particles by gravity before sending the water down the pipes to the communities below.  This was the location of intentional sabotage about a month ago to prevent people in the villages below from having access to water. 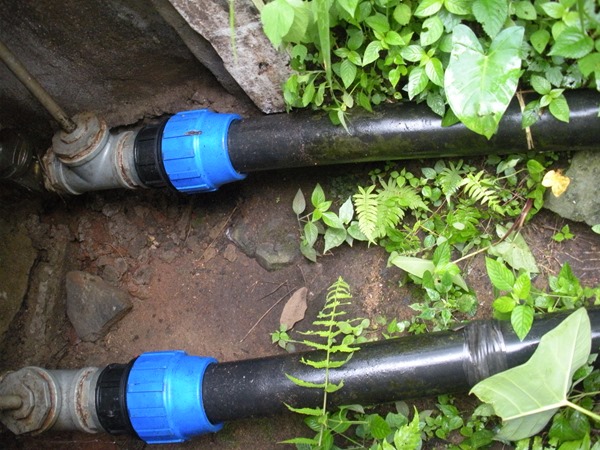 These are the unprotected, plastic HPDE pipes that leave the sedimentation basin and bring water to the villages below.  On the bottom pipe you can see black tire tubes that were utilized to repair the cut that a machete made in the pipe.  These pipes are 110mm, which make them difficult and expensive to repair. We were fortunate that the saboteur had only made one cut in the pipe and that it was repairable by the inexpensive tire tube method.  I purchased a 110mm HDPE Union in Kampala incase this repair didn’t hold and it ran me about $56.  I now have it for a backup in the future.

Even though we didn’t have to do this specific repair, as a financial comparison, adding local labor to help make a repair would increase the cost to about $70 (Material plus 4 Laborers to help with excavation and positioning the pipe).  This represents about 60% of what the local water committee is currently able to collect in one quarter from its small user fees and 15% of the annual budget.  For one repair. Turns out sabotage is not sustainable.  Repairs to the water system can cost between $2 to over $70 per repair depending on the nature of the problem. Currently my assistance in materials and money for labor is subsidizing the local water committee at somewhere around 80%.  There is a long road ahead to make this project sustainable and it is overwhelming to realize that it is grossly underserving the community and needs large expansion projects to increase supply. 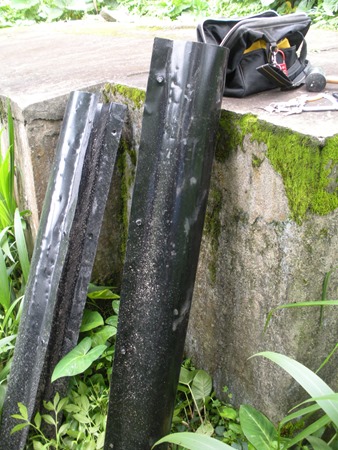 These are the pipe covers that I designed and had a local technician fabricate to protect the 4 feet of HDPE pipe when it leaves the sedimentation basin. 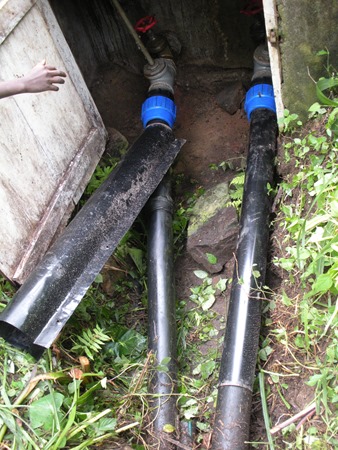 Here’s the installation of the metal covers, the one on the right has already been bolted into place.  The remaining exposed pipe was inside the trench and was recovered by soil afterwards.  Total project costs of trying to prevent those “steps back” (door, masonry, metal covers, and labor) was about $170.