Chirascos and the Great Crater Lake-

Beard Status: Full formed beard, just beginning to pull away from my face.
Health Status: I've been having cold type symptoms, but it hasn't really turned into anything yet.
Stamina: I'm exhausted from my consecutive trips to Karugutu – hoping to get some good rest this weekend.

So the past two days have been filled with adventure. The Masso family and Kim and Carol picked me up on Wednesday afternoon after working in Karugutu for 3 more days. The car was loaded and the destination was sure – Ft. Portal. In Ft. Portal the first thing that we did was stop by Andrews', which was a small hybrid convenience/supermarket type store, but it actually had recognizably packaged food, making me feel incredibly awkward. When you don't do things like shop in normal ways, when you finally do them, something just feels a little amiss. We grabbed dinner at a local joint where the food was very flavorful—not something that you always find here. Afterwards we went to the Chedester's house, a missionary family with World Harvest Mission who is currently traveling in Kenya, meaning that we got to stay at their house. 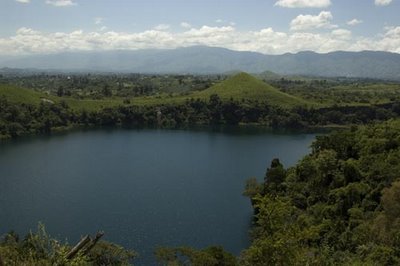 The next morning we jumped back in the car and set sail for lake Kyaninga! Lake Kyaninga is a crater lake, meaning that it is a lake that has formed in the top of a dormant volcano. Yeah, pretty sweet. Michael discovered it when he was flying in a plane over head and as a result he tracked down the location. The water is a crystal blue-green and a chilling 75 deg. Michael has a boat down in the crater lake (yeah, by the way, you have to hike down into the crater to access the lake), so after we got to the lake and grabbed some lunch, we went down and loaded up the boat and went out to the middle of the lake for a nice swim. After the swim of course we had to head to the rope swing on the side of the lake – good times. I wowed everyone with my stylish belly flops and was even able to pull off an actual backflip. (both of these are on video of course). After the rope swing, Michael gave us a tour around the edge of the lake, where we were able to observe much wildlife, including two species of monkeys! I can't remember them or even spell them if I could, but one had black faces with a beige fur and the others were black with a white ring around the faces and a white tipped tail. They were absolutely beautiful to watch in their natural habitat. Of course I got some footage and pictures for KT Batie, because I know that she would want to see it J.

After the tour we went back up to the edge of the crater to make camp. At this point we had to decide whether or not to camp or run for the hills. Basically, storms were dodging us all afternoon and we weren't sure if it would worsen. We made the aggressive decision to weather it out. Oh the choices that you make in life. We set up the tents and began working on dinner. I say working on dinner, because there are few dinners that I would consider to have been more of a chore than this one. This would be because the firewood that we had purchased was too green even though it looked dry and we were doing this in a light sprinkle. We had to constantly be tending the fire by blowing on it to keep the flames going. Even with the constant TLC, at times I thought we might not be able to keep it going. Every two minutes we were pulling the food off of the fire to tend to it. And now we get to the food. Michael had brought along a personal favorite, chirascos (pn. Chir – RRRRRRRRRRAASSSSS – cos, and it must be said with much vehemence). Chirascos are basically sausage, onions, green peppers, spicy tomato, avocado all wrapped up in a chapatti. They were delicious.

Dinner was followed by the obligatory smores—the best part of which being that there were three little children who liked to roast a bunch of marshmallows and then not eat all the smores that those marshmallows made. Meaning, more yummy for my tummy. After the mallows we sat by the fire telling old camping stories and other random tidbits from our memory banks as the fire slowly dwindled down. 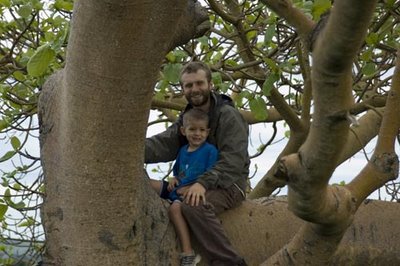 And then came the night. We all were pretty tired by about 10:30pm (pretty late for camping) and we retired to our tents. Being the only single male on this excursion, I had a tent to myself. The night started off pleasant enough, a cool breeze, just enough to keep you nice and comfortable in the tent. Sometime in the middle of the night, this cool breeze decided to turn into a raging tempest blowing the tents in all possible directions. Fortunately for me, my tent somehow wasn't staked down in the process of setting up the tents. So the only thing keeping my tent on the ground was me in the middle of it. So that was pretty exciting. Especially when the tent fly flew off and let all the rain in. It's king of funny in hind sight, because I kept curling myself into a smaller and smaller ball as the water slowly seeped into my tent. In the morning, the only dry place in the tent was where my body lay on the mattress. Good stuff.

The next day we went back down to the lake and went on the rope swing again. I perfected my back-flip as well as my belly flop. We also had a lovely PB&J sandwich picnic on one of the jumping rocks, which the local ants greatly appreciated. That night we went back to Ft. Portal and watched the Masso children so that Michael and Karen could have a night away. The kids were hilarious and we had a really good time with them, even if they where us out completely in less than 24hrs.

So now I am in Kampala, staying at the ARA. A hotel that actually has some American type luxuries, such as hot water, electricity that sometimes works (even the capital has intermittent power), and comfortable mattresses. I'm hoping to get some good R&R while here and also to not be too busy running errands, which there are plenty of them to run!!! I hope that everyone is well in the States. Drop me an e-mail.

did you jump off the cliff at kyaninga crater lake?? you're not cool unless you did...
in prayer, rachel hawkins

AH NO!!! sad times. there was no cliff jumping this time at kyaninga crater lake. Not that I wouldn't have...we just didn't have time (b/c of weather and mapping the lake). I did manage a few backflips off of the rope swing! hope you are well-